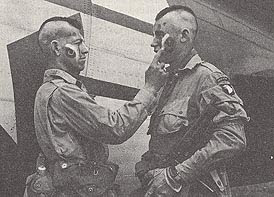 Unlike those others who contribute to this site, I never saw action during my 1968-'72 tour of duty in the U.S. Navy.

The closest I ever came to being in harm's way was during ports of call in Turkey and other Middle-Eastern countries. Because of the prevailing anti-American sentiments in that part of the world at the time, we were ordered to travel about in groups of six or more when we went ashore.

Our instructions were to "take whatever action necessary to protect ourselves and our shipmates" while off ship. Although we had to ignore profanities and had to dodge projectiles hurled at us a few times, there were no incidents.

Today I came across an interesting obituary in our local newspaper.

John Agnew - April 8, 2010 at the age of 88.
John 'Jack' Agnew, one of the original members of a U.S. Army unit that operated behind enemy lines in World War II and is often credited with having inspired the movie "The Dirty Dozen," has died at the age of 88.

The Filthy Thirteen was the name given to a sub-unit of the regimental headquarters of the 506th Parachute Infantry Regiment, Division, of the United States Army, which fought in the European campaign in World War II. This unit was selected and trained to demolish enemy targets behind the lines.

They were assigned to destroy a bridge over the Douve River during the Normandy Invasion of Europe in June 1944, a mission that cost the lives of most of these men. The group was airdropped for the mission by aircraft of the 440th Troop Carrier Group of the U.S. Army Air Force.

This unit was best known for the famous photo (above) which appeared in Stars and Stripes, showing two members wearing Indian-style mohawks and applying war paint to one another. The inspiration for this came from Jake McNiece, who was part Native-American.

After a disciplinary incident while on leave, McNiece joined the "Pathfinders". These were paratroopers sent in ahead of the main force to guide them in. Expected casualties were 80-90%. The pathfinders were dropped into the encircled city of Bastogne at the height of the Battle of the Bulge. Their equipment enabled them to guide in subsequent airdrops of supplies crucial to the continued resistance of the trapped 101st Airborne Division.

Many believe this unit was the inspiration for E.M. Nathanson's The Dirty Dozen a view supported by interviews with the daughter of a surviving member of the unit. Barbara Maloney, the daughter of John Agnew, a private in the Filthy Thirteen, told the American Valor Quarterly that her father felt that 30% of the movie's content was historically correct, including a scene where officers are captured during a training exercise.

Unlike the Dirty Dozen, the Filthy Thirteen were not convicts; however, they were men prone to drinking and fighting and often spent time in the stockade. While there were similarities between the Filthy Thirteen and the Dirty Dozen, there were also many differences. The name "Filthy 13" referred to the fact that while training in England, they washed and shaved once a week and never cleaned their uniforms.