Thanksgiving: The Eyes of a Survivor

"When a great ship cuts through the sea, the waters are always stirred and troubled. And our ship is moving--moving through troubled waters, toward new and better shores."
-Lyndon B. Johnson

While not about Thanksgiving Day, this story embodies the spirit of thanksgiving and is befitting the decorum of this site. It's the story of a survivor thankful to be alive so that he can give to others. I'm thankful that he chose to share his story with me.

In 1993, I was working as a security guard at the Shriner's Burn Institute in Boston. I don't think I need to elaborate about the wonderful work the Shriners do providing medical care for children, especially those who have been severely burned. Their work is well documented, as well as are the miracles performed at their burn hospitals across the country.

Thanksgiving Day of 1993 was the only Thanksgiving on which I ever had to report to work. My holiday wasn't ruined however, as I was able to partake of a turkey dinner with the fixings from the cafeteria, and was able to join my family later for desserts at home.

After making my rounds, I sat down to eat my Thanksgiving meal during the last half hour before the cafeteria would close. I was joined by one of the Shriners who had just arrived at the hospital.

(It should be noted that the Shriners volunteer their time at the hospitals to make themselves available to help the staff. They might be asked to drive parents of the patients to and from housing provided by the hospital, for example.)

We wished each other a happy Thanksgiving and chatted a bit. He noticed the U.S. flag and Navy anchor badges on my jacket, which were still there after I had donned them for Veterans Day.

"So, you were in the Navy too. When and where did you serve?" he asked.

After I answered I said to him in return, "And you must have served during WWII. On a ship or land-based?"

He grew quiet and didn't answer for a few minutes. I thought I must have struck a nerve and that he didn't like to talk about his war experiences. (My dad was like that.)

He said that it was difficult for him to talk about. He said he sometimes had nightmares from his experience, even though (at the time) it had been 48 years before. Then he smiled and said that ever since he'd been dedicating Thanksgiving Day to help others. 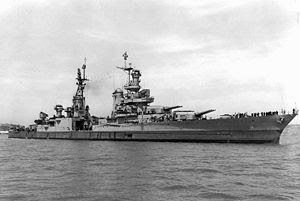 I gasped in fascination. I didn't recognize the hull number of his ship, but before he mentioned her by name I knew he was talking about the U.S.S. Indianapolis!

Even though he was an Ensign assigned to the communications shack he was not included among those who knew what secret cargo she was transporting to the air base at Tinian. From the moment she'd set sail she'd been on complete radio silence, with orders not to break that silence under any circumstances.

On July 26, 1945, the U.S.S. Indianapolis had delivered to Tinian the component parts including the uranium projectile which would be used to assemble Little Boy, the first of the only two atomic bombs to ever be used in anger on mankind.

I saw tears in the eyes of a survivor. He was unable to talk in detail of what happened four days later on July 30, 1945. At 0014 hours, two torpedoes from a Japanese submarine slammed into her. It took only 12 minutes for her to sink, taking 300 of her crew of 1,196 to the bottom of the sea.

Even though he would say nothing of the crew's ordeal over the next four days, I understood. It has been well documented in books and on film of how 896 sailors faced exposure, dehydration and shark attacks. Of those 896, only 317 of the sailors survived to be rescued from the sea. He was one of them. 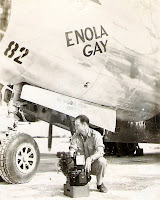 It would be eleven days after they'd off-loaded the cargo at Tinian before he or any of the surviving crew would learn of the details of their mission. On August 6, 1945, a B-29 Super Fortress, the Enola Gay, let loose the bomb that obliterated Hiroshima, Japan.

So top secret was the mission of the U.S.S. Indianapolis, that she wasn't even reported overdue or missing. It was only by accident, four days after she'd been sunk that a PBY Catalina on patrol spotted the small clusters of men adrift in the sea.

Yes, I could understand why he didn't want to talk about those four days he and his fellow survivors endured. I don't believe I would be able to do so either.

He wiped a tear from his eye with his napkin and ended his story with these touching words:

"I'm thankful to have survived and ever since I've dedicated my life to giving of myself to others more needy than I."

I promised, at his request, that if ever I repeated his story, I would not reveal his name. He wished this to honor those who didn't make it.

This I learned from the eyes of a survivor: That Thanksgiving is made up of two words. May we all give thanks even while giving.
Posted by Hale McKay at 5:57 PM 3 comments:

From one veteran to all other veterans,
I salute you with a bit of humor. 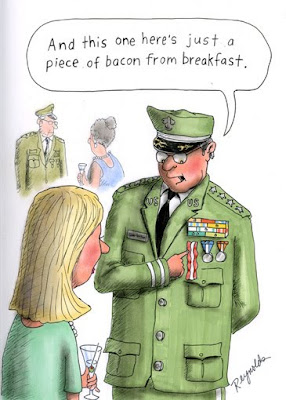