How I Began My Military Career-Ben A.

This is an account of my US Navy enlisted service from January 1943 to March 1946.  I probably traveled further in those 38 months that I did in the 30 years in the US Army.

I finished high school in Thatcher, Arizona in 1941which turned out to be a tough year for entering military service. Fortunately I graduated at age 16, not due to my natural brilliance, but the fact that the state of Virginia only had 11 years of schooling at that time. I started school in Virginia in 1930 and continued there until we moved to Arizona in 1938.

In early 1942, my father, an Army Captain, received order to go to Eritrea to serve with the British forces there. Before he left he told me NOT to enlist in the military. I was supposed to return to school and sharpen my math and other high school subjects. He wanted me to attend Virginia Polytechnic Institute and enroll in ROTC.

As soon as I was 18 I knew that my time was near for being drafted into the US Forces. I decided to enlist in the US Navy. After boot camp I was sent to Newport, RI to attend fire control school. (That is not fire fighting but fire direction. It helps the gunners hit their targets.)

As a Seaman Second Class my first ship was the USS Milwaukee. It was a light cruiser. It’s home port was Recife, Brazil. Its mission was to search for and destroy German submarines. A destroyer accompanied us. It provided the sonar to detect the enemy subs. We would sail for two weeks along the equator for to Africa and return to Recife for a day of liberty.

After approximately four months of this duty the ship was ordered to proceed to New York. The next mission was to accompany a convoy of troop ships To Belfast, Ireland. We then sailed to Edinburgh, Scotland for two days of liberty. From there we sailed North to Scapa Flow, Scotland where we joined a British convoy in route to Murmansk, Russia. When we arrived there we would transfer the Milwaukee to the Russian Navy.

The transfer required 30 days of training the Russians. During that time we lived on one half of the ship and the Russians on the other half. The name of the cruiser was changed to the Mermansk. The US flag was replaced by the Russian flag to signify the completion of the transfer.

Without a ship we were assigned to US liberty ships and British ships for our return to Scotland. Four other sailors were with me on a liberty ship for the journey. About half way back to Scotland we were attacked by two German subs off the coast of Norway. They launched two torpedoes at the “baby” aircraft carrier in the fleet, but a liberty ship took the hit. It sank immediately with the two torpedoes in her hull. Several hundred Russian sailors in the ship’s hold went down the ship. The subs proceeded ahead of the convoy and released mines that floated back into our convoy.

Upon reaching Scapa Flow we thought we would be transported back home to get a new light cruiser. No such luck! Our mission was to go to Barry, Wales and re-commission the SS President Warfield and proceed to Milford Haven, Wales and participate in the invasion of France, on June 7, 1944. Our mission, along with three other similar ships had been transferred to the British Navy in 1942.  These ships, along with other similar ships, were to go to Normandy, in case the Omaha Beach mission failed. It didn’t. We were sent anyway and remained there to provide support until replaced by a relief crew. Then it was back to Glasgow, Scotland to board the British ship the Queen Elizabeth that took us back to the US.

After taking some leave time my shipmates and I were sent to Norfolk and assigned to the battleship USS New York. We set sail after a couple of weeks. The ship sailed South to Panama, sailed West through the canal and proceeded across the Pacific Ocean to participate in the battle of Iwo Jima. We bombarded Mount Suribachi for three days. Unfortunately a blade on the starboard propeller broke off. We were then sailed (limped) South to the small  island, Manus, near New Guinea to go into a floating dry dock to replace the broken screw. It took three weeks to get the propeller replaced so that we could back into the battle.

We joined the fleet that was assembled to attack the island of Okinawa. We provided support for a Marine Division going ashore in the City of Naha. After expending expending  our 14 inch shells, we sailed to a small island off of Okinawa to rearm.  During the process I had the misfortune to my hand get in the way of a nose cone on a 14 inch round. That cost me the end of my left right thumb.

Feeling sorry for me, I was ordered to leave the ship and proceed to San Diego to attend the Navy gunnery advance course. The only proviso was that I had to “hitchhike” back. It took 30 days and six different ships to get there.

The war ended in August 1945 and I was assigned to Little Creek, VA near Norfolk to complete my Naval service in March, 1946.

But enough of my sea stories – I have sailed both oceans – from the equator to the North Pole in the Atlantic and from Iwo Jima South to the equator and New Guinea.  This amounts to a multitude of travel.

I enjoyed my service with the Navy. Much of what I learned during my Navy service I was able to use during my Army service from 1950 to 1979.  But, that is another story.

This is obviously not a war story of mine, but I wish to post this tribute to a true and worthy U.S. patriot. 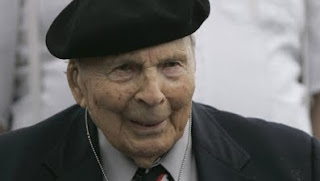 MORGANTOWN, W.Va. – He didn't seek the spotlight, but when Frank Buckles outlived every other American who'd served in World War I, he became what his biographer called "the humble patriot" and final torchbearer for the memory of that fading conflict.

Buckles enlisted in World War I at 16 after lying about his age. He died Sunday on his farm in Charles Town, nearly a month after his 110th birthday. He had devoted the last years of his life to campaigning for greater recognition for his former comrades, prodding politicians to support a national memorial in Washington.

When asked in February 2008 how it felt to be the last survivor, Buckles said simply, "I realized that somebody had to be, and it was me."

Only two known veterans remain, according to the Order of the First World War, a Florida group whose members are descendants of WWI veterans and include Buckles' daughter. The survivors are Florence Green in Britain and Claude Choules in Australia, said Robert Carroon, the group's senior vice commander. Choules, who served in Britain's Royal Navy, was born in that country but now lives in Australia. Green turned 110 on Feb. 19, and Choules turns 110 in March, he said.

Born in Missouri in 1901 and raised in Oklahoma, Buckles visited a string of military recruiters after the United States in April 1917 entered what was called "the war to end all wars." He was repeatedly rejected before convincing an Army captain he was 18.

More than 4.7 million people joined the U.S. military from 1917-18. By 2007, only three survived. Buckles went to Washington that year to serve as grand marshal of the national Memorial Day parade.

Unlike Buckles, the other two survivors were still in basic training in the United States when the war ended, and they did not make it overseas. When they died in late 2007 and 2008, Buckles became the last so-called doughboy — and a soft-spoken celebrity.

Details for services and arrangements will be announced later this week, but the family is planning a burial in Arlington National Cemetery. In 2008, friends persuaded the federal government to make an exception to its rules for who can be interred there. President Barack Obama ordered that the day Buckles is buried that all U.S. flags on official buildings be lowered to half-staff.

Buckles had already been eligible to have his cremated remains housed at the cemetery. Burial, however, normally requires meeting several criteria, including earning one of five medals, such as a Purple Heart.

Buckles never saw combat but once joked, "Didn't I make every effort?"

U.S. Rep. Shelley Moore Capito and the rest of West Virginia's congressional delegation were also working Monday on a plan to allow Buckles to lie in repose in the rotunda of the U.S. Capitol. According to the Architect of the Capitol's website, the last person to do so was President Gerald Ford.

The honor is reserved mostly for elected and military officials, but others have included civil rights activist Rosa Parks and unknown soldiers from both World Wars and the Korean War.

Sen. Jay Rockefeller called Buckles "a wonderfully plainspoken man and an icon for the World War I generation" and said he will continue fighting for the memorial Buckles wanted.

"He lived a long and rich life as a true American patriot," said Sen. Joe Manchin, "and I hope that his family's loss is lightened with the knowledge that he was loved and will be missed by so many."

The family asked that donations be made to the National World War One Legacy Project. The project is managed by the nonprofit Survivor Quest and will educate students about Buckles and WWI through a documentary and traveling educational exhibition.

"We have lost a living link to an important era in our nation's history," said Secretary of Veterans Affairs Eric Shinseki. "But we have also lost a man of quiet dignity, who dedicated his final years to ensuring the sacrifices of his fellow 'Doughboys' are appropriately commemorated."

In spring 2007, Buckles told The Associated Press of the trouble he went through to get into the military. "I went to the state fair up in Wichita, Kansas, and while there, went to the recruiting station for the Marine Corps," he said. "The nice Marine sergeant said I was too young when I gave my age as 18, said I had to be 21." Buckles returned a week later. "I went back to the recruiting sergeant, and this time I was 21," he said with a grin. "I passed the inspection ... but he told me I just wasn't heavy enough."Then he tried the Navy, whose recruiter told Buckles he was flat-footed. Buckles wouldn't quit. In Oklahoma City, an Army captain demanded a birth certificate. "I told him birth certificates were not made in Missouri when I was born, that the record was in a family Bible. I said, 'You don't want me to bring the family Bible down, do you?'" Buckles said with a laugh. "He said, 'OK, we'll take you.'"

Buckles served in England and France, working mainly as a driver and a warehouse clerk. An eager student of culture and language, he used his off-duty hours to learn German, visit cathedrals, museums and tombs, and bicycle in the French countryside.

After Armistice Day, Buckles helped return prisoners of war to Germany. He returned to the United States in January 1920.

After the war, he returned to Oklahoma, then moved to Canada, where he worked a series of jobs before heading for New York City. There, he landed jobs in banking and advertising. But it was the shipping industry that suited him best, and he worked around the world for the White Star Line Steamship Co. and W.R. Grace & Co.

In 1941, while on business in the Philippines, Buckles was captured by the Japanese. He spent more than three years in prison camps.

"I was never actually looking for adventure," he once said. "It just came to me."
Posted by Hale McKay at 7:04 PM No comments: