Unless one has actually witnessed the process, it isn't easy to describe the operation of refueling at sea. It is a carefully choreographed exercise between the crews of two ships. Obviously, maintaining matching course headings and speed are of the utmost importance.

The three photos below were taken by myself during one such operation. The first picture at the left shows my ship approaching a refueling tanker. In the middle, the fueling nozzle (referred to as the "donkey dick" by sailors) can be seen at about the halfway point between the two ships. In the third image the the nozzle has been secured to the refueling station and pumping by the oiler is underway.

To begin the process, lines are passed between the deck hands of the two ships. Usually a smaller line was fired by gun by a Gunners Mate onto the deck of the other. This line was attached to exceedingly larger lines until a large rope (hawser)attached to the refueling hose itself would be pulled to the receiving ship.

(Not pictured) a long line of upwards to fifty or more crewman would be on deck on the opposite side of the ship manning the rope, literally pulling it across the expanse of churning water between the two vessels. Depending on the conditions of the sea the exercise could be a daunting and backbreaking tug of war for the men on the ropes. Meanwhile, a petty officer, usually a chief, would be somewhere above shouting to the men to keep them pulling.

I don't know if the operation of refueling at sea has been changed or has been improved in the modern Navy, but this was the way it was done in my day. 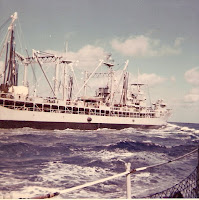 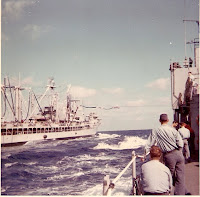 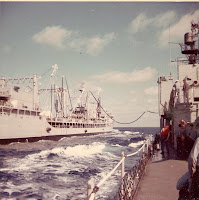 On January 22, 1971, I wrote the following description of refueling at sea in the form of a poem. It was inspired by such an event in the midst of a sudden storm. While the rhyming lines may be light in nature, the actual event was anything but.

Coming of the Tempest's Rage

The ship had set sail near to a week ere,
And it seemed she was a burning air;
The crew all knew we needed the oil,
Lest we sit dead, we needed to toil.

The sea, she was in a bad mood,
And she took our efforts as rude;
For she slapped hard at our craft
Showing no mercy forward or aft.

But our diligence kept us in pace,
For not fuel-less would the sea we face.
Inch by long inch the hawser creeped,
Inch by inch the perspiration seeped.

Heave ho! Heave ho!
Put your backs into it!
You can rest when we sit!
Heave ho! heave ho!

I, at line's end kept the rope from fouling,
While those ahead continued their pulling.
My muscles weren't as strained as much,
But I too was weary from the rope's touch.

Intermittently, the fingers of Lady Ocean
Grasped at the men with angered emotion;
And they cursed under their breath
As they were drenched salty and wet.

I, however, received only a salty spray
That the maritime breeze blew my way.
Above all the groans roared that voice,
One that irritates, the kind that annoys:

Why don't you put your balmy hand
By ours and pull from where we stand?
For if you don't appreciate our health,
Damn you, come and do it, mate, yourself!

Alas, the overseer stood fast upon his perch,
Cried again, "Heave ho, or on you I'll lurch!"
And the angriest tempers in the men arose,
Their strength increased despite their woes.

Ever so slowly the rope-drawn fuel line
Crept across the churning ocean brine;
The white-capped arms kept lashing out
But the ocean's roar couldn't still his shout:

I could almost feel the mens' strength
Though the line was stretched at length;
Somehow, I felt the surging of their power
Flowing like water into a blooming flower.

But it all seemed of so little use to me,
It all appeared nothing but abuse to me.
What need would I have of all that brawn
When the others kept the line tight-drawn?

I peered for a moment at the tug of war,
Wondering what on earth I was there for!
For even the weakest of those men up there
Would compare to me in a manner unfair.

It was then that all hell broke loose,
And it threatened an end to our cruise!
Lady Ocean, she seemed to leap skyward,
And the men, their screams were heard!

Below, Neptune must've been wearing a grin
As a great wall of sea swept down upon the men.
I don't really remember all that occurred
Or even what sounds I thought I had heard.

I felt myself being swept off of my feet
And dragged aft with the water's retreat,
Only to finally stop at the unmanned line
In a torrent of the draining salted brine.

I know I heard him as I lie there prone,
But I somehow felt that I heard it alone;
At first there was a terror unrestrained
That it was only I who still remained.

But unto my ears were moans from beyond;
The rope tightened as one we did respond.
The men, although stunned were much alive,
Somehow all of us had managed to survive.

Some of us hurt, glad to be among the living,
Cursed at the ocean for being so unforgiving.
Life was something for us to keep and love
And was heard by us a voice from up above: