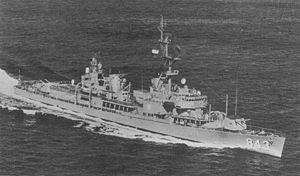 It must have been the summer of 1969 when I found myself standing alone upon the fantail of the Destroyer that had been my home for the past eleven months. The U.S.S. Warrington (DD-843), a re-fitted WWII Gearing-Class "Tin Can" was one of the steamingest ships in the Atlantic Fleet at the time.

We were somewhere in the middle of the Mediterranean, a single vessel visible upon the vast sea. Our churning wake disappearing behind us was the only indicator as to from where we'd come. The bow slicing through the waters offered no evidence as to our destination, but the pair of dolphins riding the waves it thrust aside did not seem to mind.

Call it the horizon if you will, but there is something forbidding about a straight line stretching 360 degrees around you comprised of only sky and water. There is a sense that you are surely looking at the distant rim of the world's edge. Was it any wonder that ancient sailors thought they would surely sail over the precipice to their deaths and into oblivion ?

My silent vigil was not borne of the fear of the unknown or what lie beyond the horizon. I was not concerned with the unknown beyond that point where the stars in the heavens met and merged with their reflections upon the smooth surface of the sea. I was more attuned to the world that I knew was in existence beyond that barrier.

Somewhere, a half a world away in a hostile eastern land there was a horizon much different than that which I contemplated. How might he have looked upon his horizon? Had he lie awake in silent reverie trying to see beyond his? Had the same stars decorated the firmament before his eyes?

The spray of the salty mist in my face could not divert my gaze from the featureless line that separated sea and sky. I turned to face what I thought must have been the west to gaze in the direction of that land we had called home. Choking back tears of private remorse wrought by the crumpled envelope in my hand - I saluted him.

Franklin D. Ashley, Jr., was both my first cousin and best friend. We were the same age and had grown up to young manhood together. He lived on a sprawling farm, while I lived in a small town ten miles away. Thanks to visits every weekend and stays at my grandparents' home on their neighboring farm during the summer, we were seldom apart during our informative years and early teens.

FD, as he was called , and myself played and frolicked on the farm, up in the surrounding hills and woods and down by the ponds and streams in a seemingly endless slate of adventures and misadventures for several years. The memory of some of those adventures had been lost with the passage of time, but others had become a legacy to the innocence of our youth.

As long as I live, I shall never forget those days when a girl our age would show up at one the ponds while we would be skinny-dipping. She lived on her parents homestead about two miles down the hillside below. She would jump in the water even as we scurried to get into our underwear. (In time, we would see her climbing the hill and would purposely wait until she was pond side before we would dash for our underwear.)

Judy, I'll call her, was heavily blessed with bosom even at the age of twelve. Although she would keep her blouse on when she joined us in the water, FD and I had a game trying to see who would be the first to tug at her blouse until her bare breasts were exposed. She knew the game, and played along. Once one of us had succeeded with our goal, she would leave them exposed and made no attempt to hide them until she was ready to go home.

Judy had a game of her own as we learned one day. Although FD and I tried to stay submerged below the waist, she was well aware of the projections behind the fronts of our shorts. Offering her breasts as bait before our eyes, she would grab at us below the water. More times than not she would manage to dash from the pond with our respective pairs of underwear in her hands. I cannot honestly say that we'd put up much in the way of resistance.

In time, in order to keep our clothes clean and to spare the wrath of our parents, the three of us began to strip before hitting the water. Whether we were splashing in the water or simply lying next to each other on the bank, our mutual nudity was shameless. The erections that FD and I often sported fascinated her and she would at times "inspect" them. I being circumcised and FD not, she was intrigued by our differences.

Of course, her differences were no less intriguing to us. Her large breasts not withstanding, the eventual advent of pubic hair soon drew our attention more and more "south of the border." By the time we were each 16 years old, we had all begun to sense those feelings and stirrings deep within us.

The water games never went beyond those playful acts of exposure. In time, the visits to the ponds came to an end. The three of us remained friends for years to come, well after the innocent days of skinny-dipping had passed.

Perhaps my fondest memory of FD, ironically as it seemed when I was standing beneath the stars, was when we played soldier and war games. Now our war games weren't like the typical war games the other kids played. Quite the contrary, our games included an actual live enemy with which we would engage in acts of combat.

Benny wasn't the best of adversaries, but he quite literally gave us a run for our money. Although trench warfare wasn't his favorite game he never backed away from the battles. He might have been faster and stronger than the two of us, but we always proved to be smarter.

We learned one day however, that Benny was not stupid! That was the day that our war games came to an end forever.

Our weapons of choice were hand-made slingshots. Our ammo usually consisted of un-husked horse chestnuts. After gathering our ammo we would sneak upon the unsuspecting Benny and let loose with a salvo of well-aimed chestnuts. Once under siege he would then turn and charge headlong after us.

We would run as fast as our feet could carry us with Benny nearly catching us. Then we would jump into a three-foot deep trench and watch as Benny would go sailing over the trench. About two feet lower in elevation and beyond our trench was a large perpetually wet mud hole. It was in that mud hole that the unfortunate Benny would splash into, usually up to his knees. It would take Benny a few minutes to get out of the mud, and by that time we would be long gone.

Then there was the day that Benny showed us just how smart he could be. It is here that I would be remiss not to note that Benny was FD's father's billy goat!

The chase was on with Benny hot on our heels. Benny did not take kindly to being shot with chestnuts. As we had done countless times before, FD and I dove into our trench and waited for Benny to pass over us into the mud hole. However, this day we did not see Benny leaping above us over the trench !

We waited in surprise. What happened to Benny? Surely he didn't give up! After several minutes, FD's curiosity got the better of him and he raised his head above the rim of the trench to see what had happened to our adversary.

Benny had proven to be much smarter than we'd ever given him credit. He had stopped short of the trench and was standing there waiting. At the very moment that FD's eyes cleared the edge of the trench, old Benny lunged forward and smacked my cousin with a powerful headbutt square in the forehead. Benny then waited by the trench for nearly an hour before he finally gave up and walked away out into the pasture.

FD would experience a massive headache and had to face a barrage of questions from his parents when they later inquired about the swollen lumps on his forehead.

Years later, in the height of the war in Vietnam we would both answer the call of Uncle Sam. I would enlist in the Navy and he would be drafted into the Army. There was a rumor going around that our old friend Judy was pregnant and that FD was the father of her baby. I never found out if it was or wasn't true.

One fateful day, somewhere in the middle of the Mediterranean Sea, I would open a letter informing me that FD had been killed in Vietnam. It was his last day over there and he'd only minutes earlier boarded a helicopter to be flown to an airbase to catch a flight back to the States. With all he'd seen and all he'd survived over there, it took but small arms fire from a band of guerrillas on the ground to end his life as well as the crew of the chopper.

I never got to talk to him about his horizons.

I dropped my salute. Gazing upon the western horizon, I placed a few coins into the envelope for weight and then I let the letter slip from my hands. I knew I would not be able to attend his funeral and I watched in silence as the envelope disappeared beneath the churning wake of the ship's propellers.

Symbolically I had buried FD that day beneath the waves and before the eyes of God.
Posted by Hale McKay at 8:13 PM